I have been keeping a secret.

I'm on the Bundle Up Boys blog tour for
Pattern Revolution!

I was so excited when I got that Email that my coworkers thought that I had won the lottery or something ((the sewing lottery of course ha!)) I was that excited. I saw some snippets of what the bundle was going to be all about this time around on the Pattern Revolution Facebook page and knew that I was going to buy WHATEVER the bundle could offer me. Anyone who sews for boys can tell you it can be so hard to sew for boys sometimes when the patterns all seam basically the same. I know that Pattern Revolution has some awesome designers and whatever they could come up with for this bundle would be new, fabulous, awesome and cool.

For the tour we got to pick which patterns we wanted to sew! It was a tough decision but I knew that I was on a time crunch because of a planned vacation to the beach the weekend following the notification. That wasn't going to stop me;l I had to say YES!!!! I looked at the patterns that they were offering (and they are ALL cool) and figured out how much time I had to spare and what could be sewn up in my time frame. I opted to go for the Fishsticks Honor Roll Henley and EYYM's Zander hoodie.


I picked to sew up the awesome Honor Roll Raglan Henley by Fishsticks Designs first. I love this pattern, you can do color blocking, mixing patterns, use 3 different fabrics on the front if you wanted. It is a great way to use up that small square of that favorite knit for the front bottom of the henley. This pattern also includes a short sleeve as well!


I made this top for my Nephew who is 5 and I sewed up a size 6 in the long sleeved version. Unfortunately, I wasn't able to get pictures of him in his new henley but luckily for me my 5 year old nephew and 4 year old son wear the exact same size! 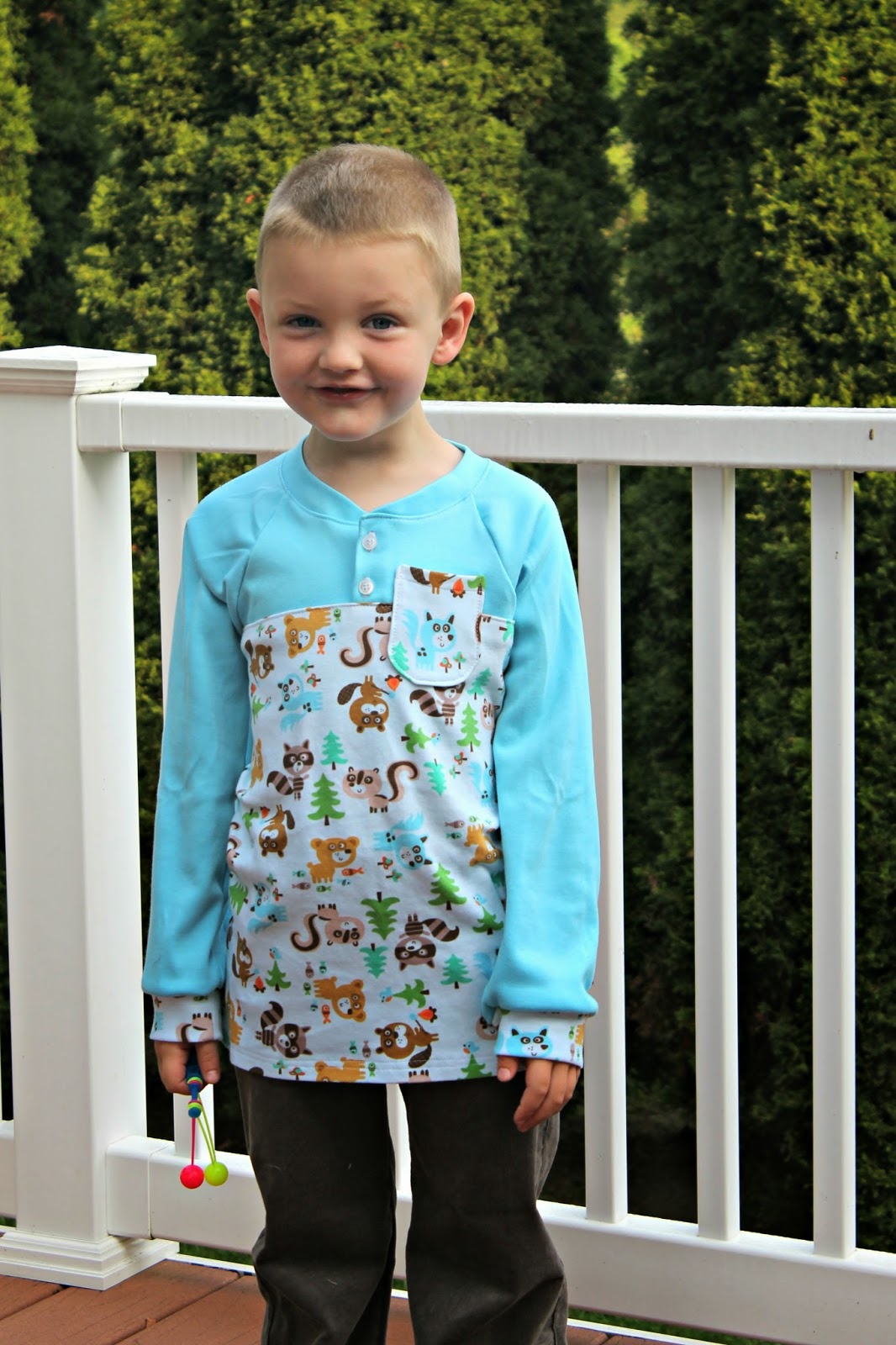 For this top I used some woodland animal knit fabric from JoAnn's I had left over from last year. I hear that they have this knit back in though for this fall. It is paired with some blue knit that I got at a second hand sale for the Salvation Army. I got quite a few yards of it for just a couple of dollars!

The tip that Fishsticks gives about starch spraying your knits before sewing will seriously change your life. Why have I never done this before??? 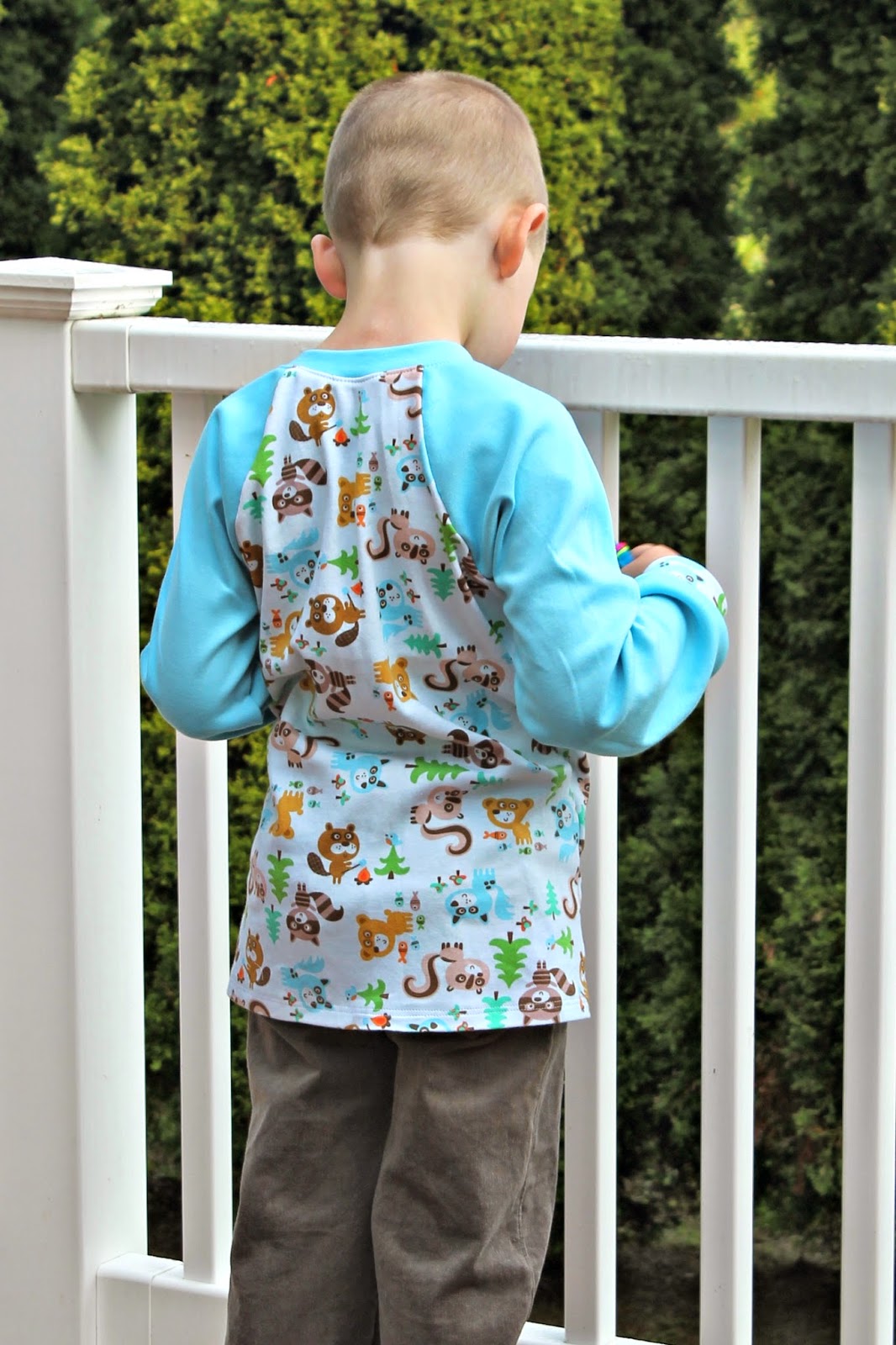 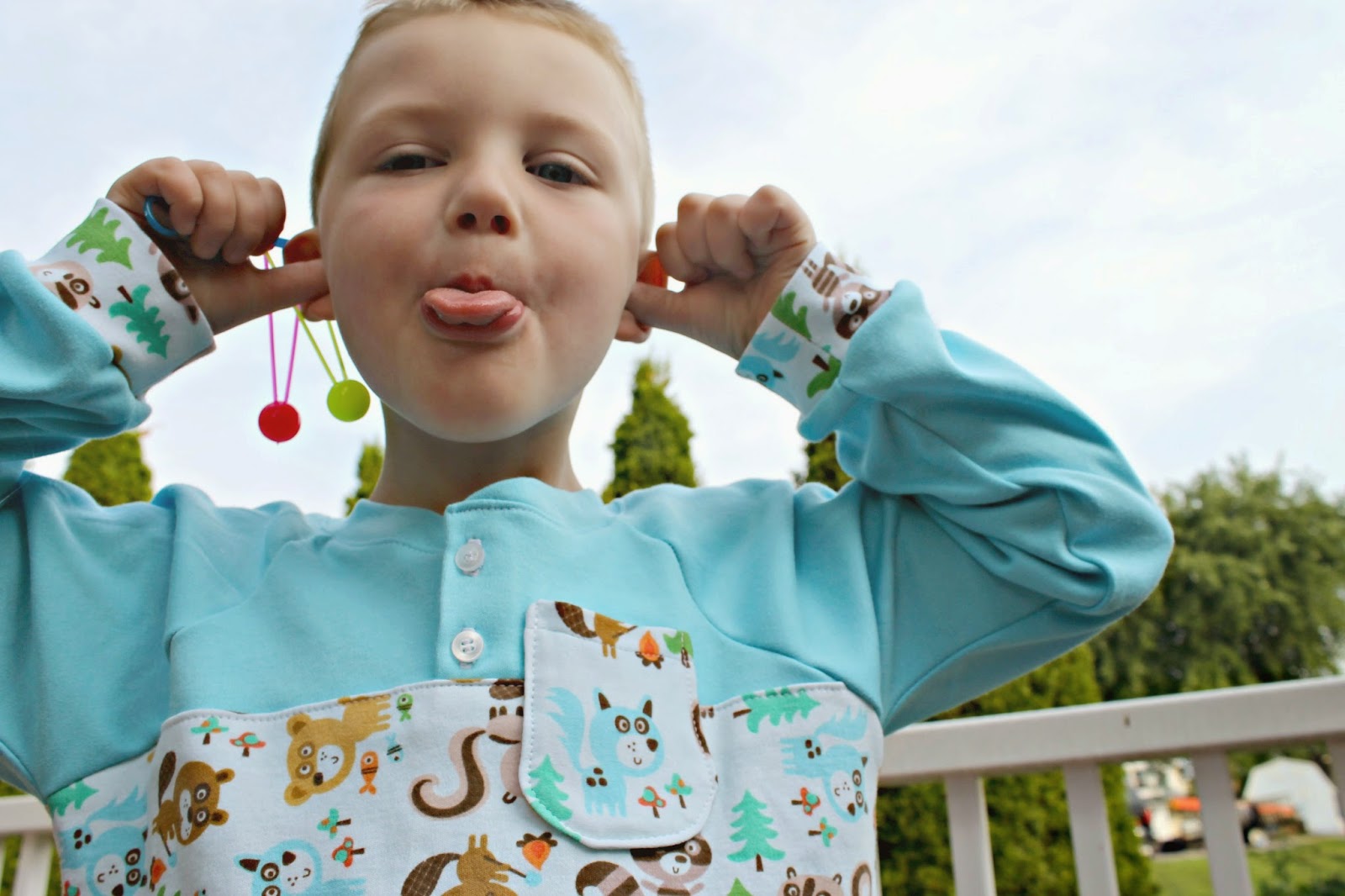 My little man is also wearing the Nowhere man pants that I blogged about here.


For my next pattern I decided to do the EYYM (Everything Your Mama Made) Zander Hoodie and Vest.

I love, love, love this pattern and so does my son. He has worn it half a dozen times already and always gets compliments on it!  The lovely Kymy came up with a pattern that is a modern take on the classic zip hoodie featuring asymmetrical zipper and front pockets. It is fully lined pattern which will keep my little guy snug as a bug. I am already planning on a second Zander but with long sleeves; on the hunt now for some thrifted sweatshirt fleece like Olga from olga-kidapproved used! You MUST see her version, so cute!! 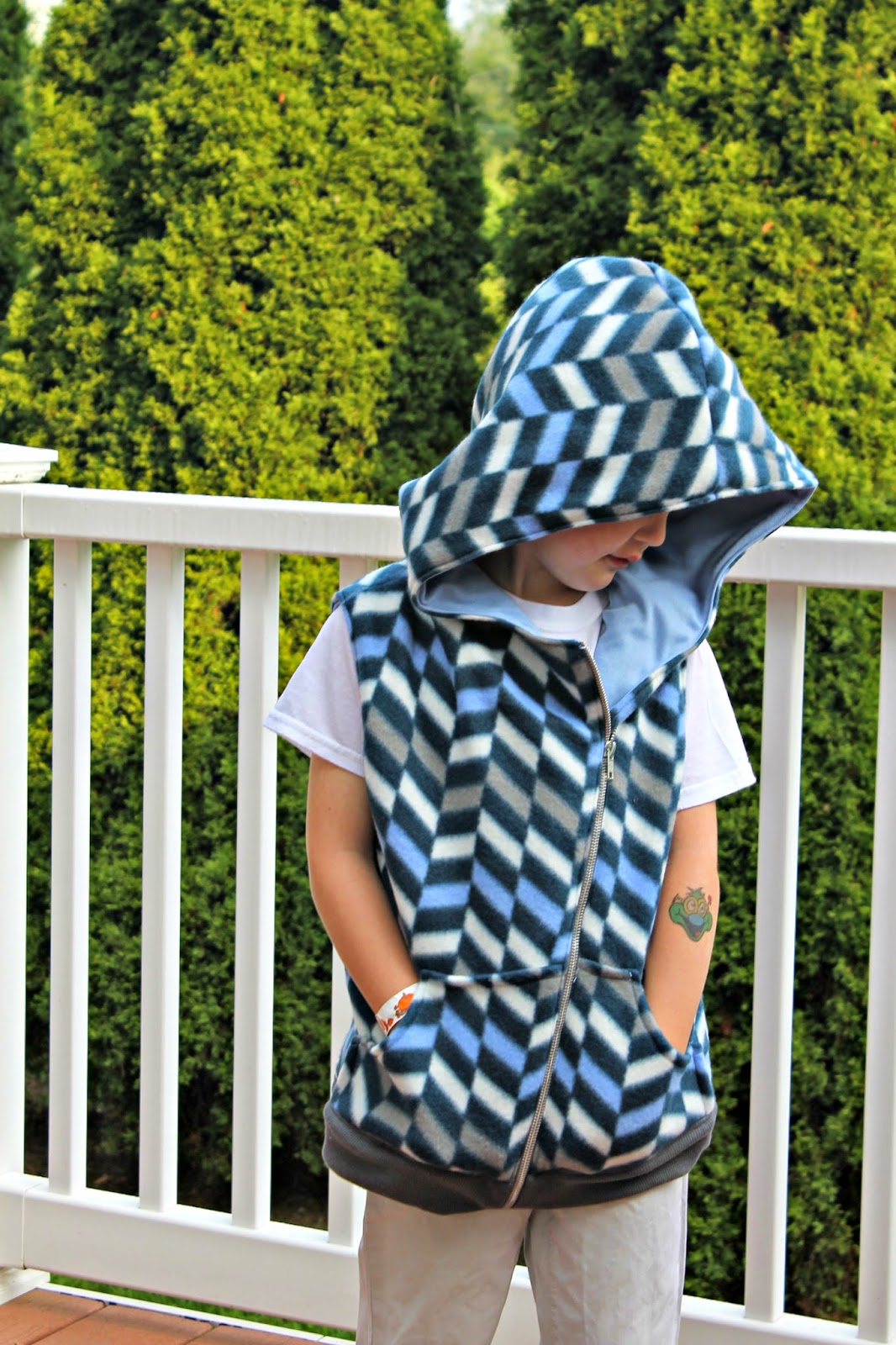 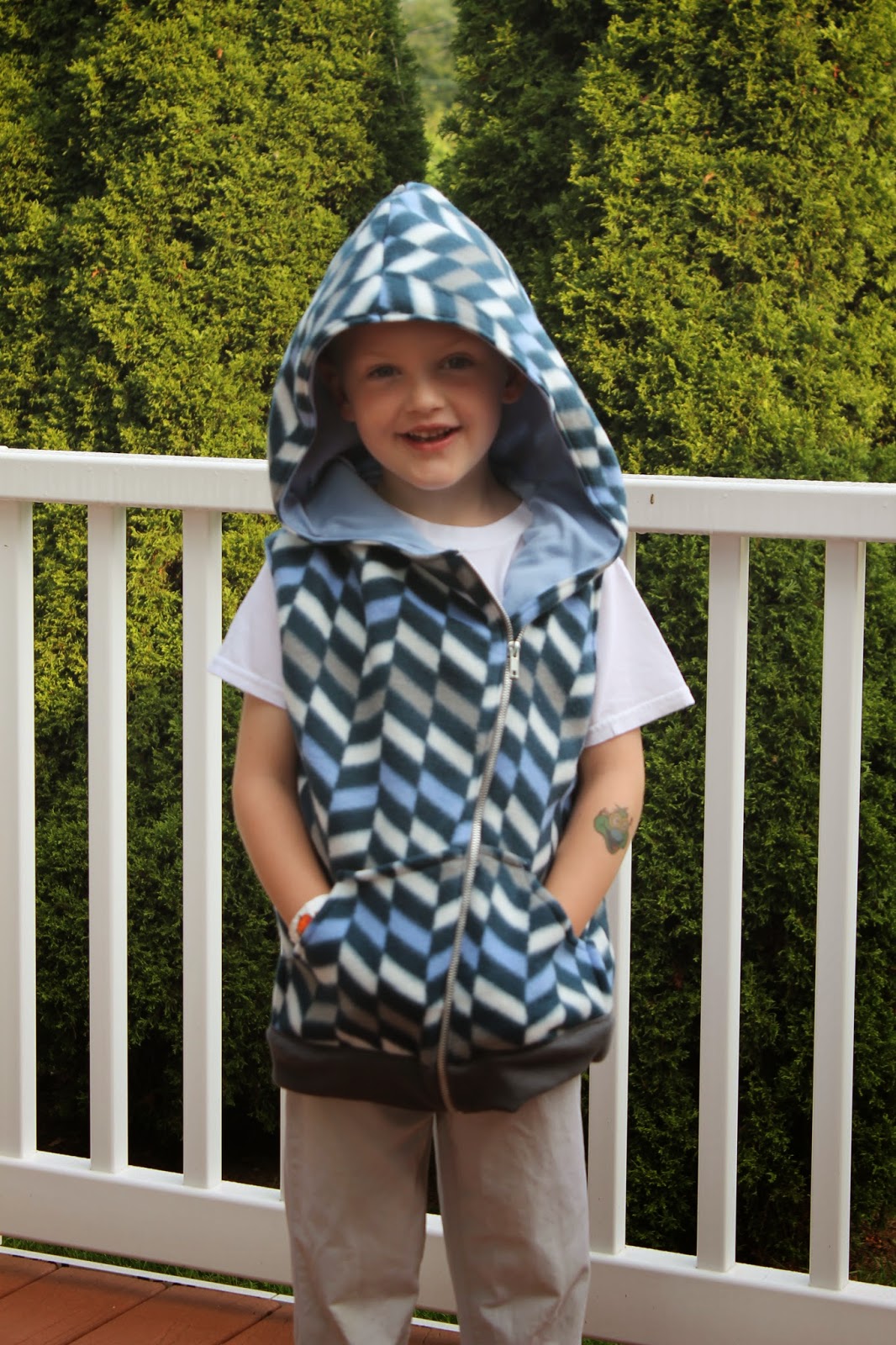 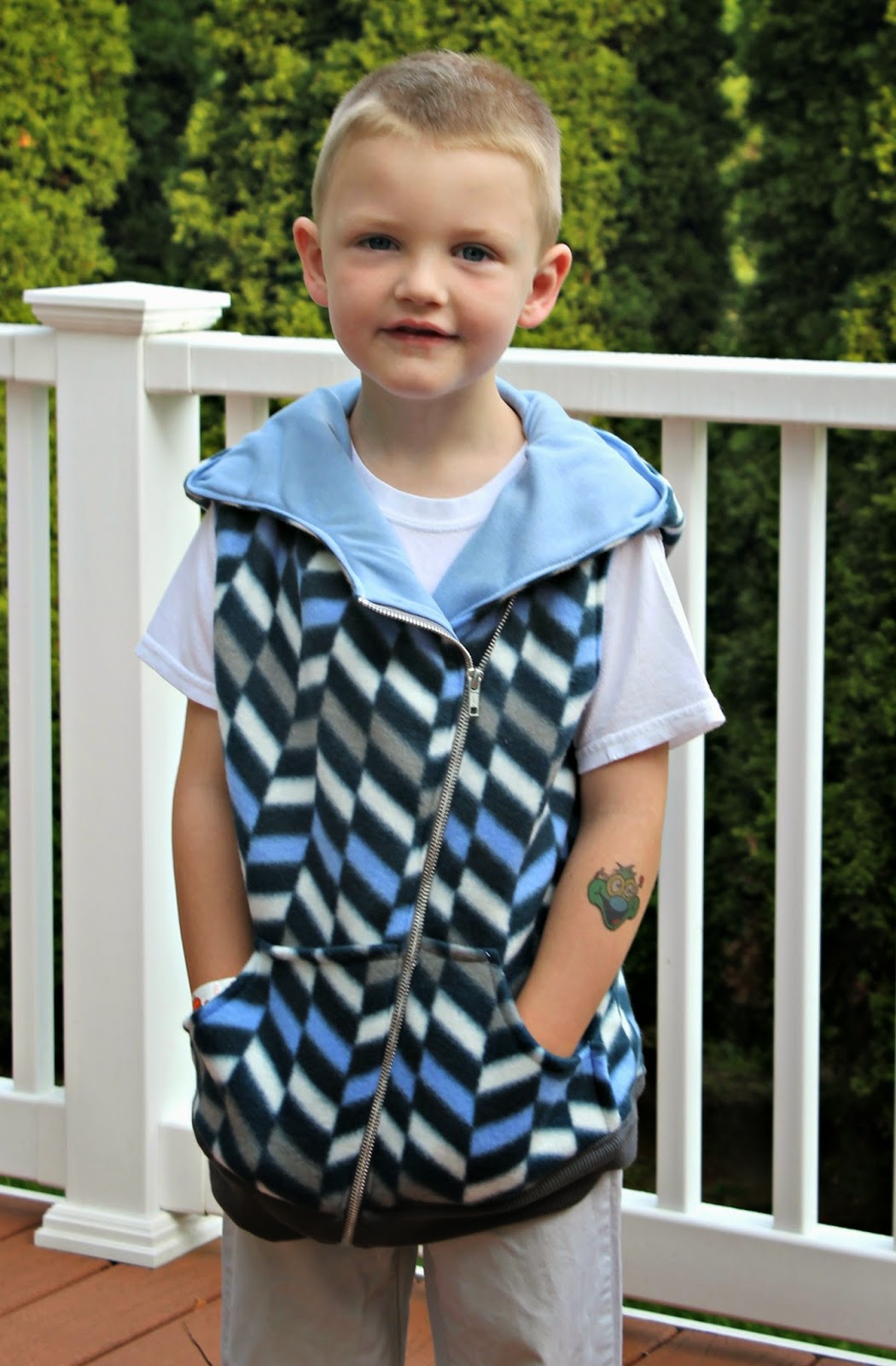 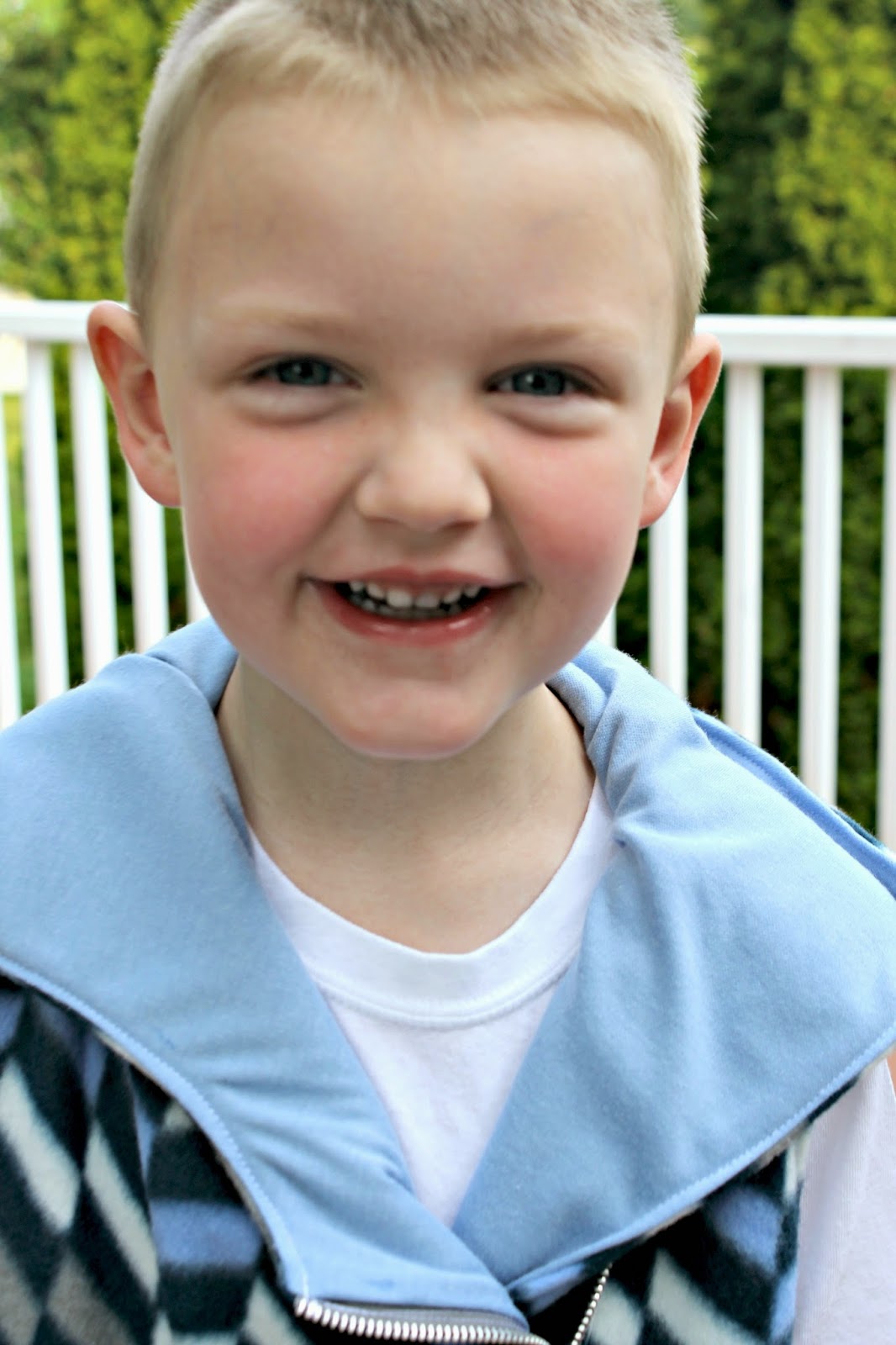 For my Zander vest I opted to use a fleece from JoAnns (of course) and another Salvation Army knit fabric find. I cut the pattern out all kinds of crazy to put the pattern of the fleece on the same angle as the zipper but I figured with the fleece, being off grain would not make much difference.

Kymy has also thoughtfully included detailed instructions to her pattern that shows up close how to stitch the lining/shell/band. If you have never stitched a fully lined jacket you just need to follow the instructions/images. Just know that it might look crazy in the middle but it WILL WORK! AND it will be amazeballs.

I sincerely hope that you will check out everyone else's amazing work. Some fantastic sewist's got in on this tour and put out some great pieces that I know you will fall in love with! 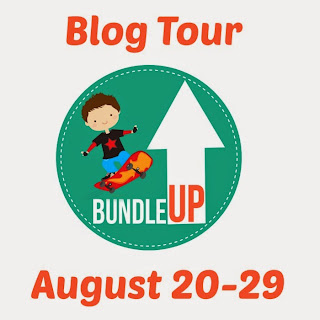 Another designer I recently was
given the opportunity to test for was Veronica of SewVery..


The woman behind SewVery patterns and the SewVery Blog.
She is just so sweet and a talented sewist.
You should really check out her recent finish of  Radiant home studio's retro rucksack. I love the colors Veronica used!
I actually won this pattern a while back and it is still hanging out it my to-do pile:)

Any-who back to the Sunny Dress and Top pattern review.
This pattern includes a cute tie back and two neck options and two lengths.
One neck option is your basic rounded neckline and the other includes a ruffled neck.
Your two lengths available in this pattern is a regular top and a dress length.

For my first run testing of this pattern I sewed up the size 8 for my Niece using view B (no ruffle) in a dress. The dress sewed up so very quick and you could easily sew up 3 or 4 assembly style for school in an afternoon. 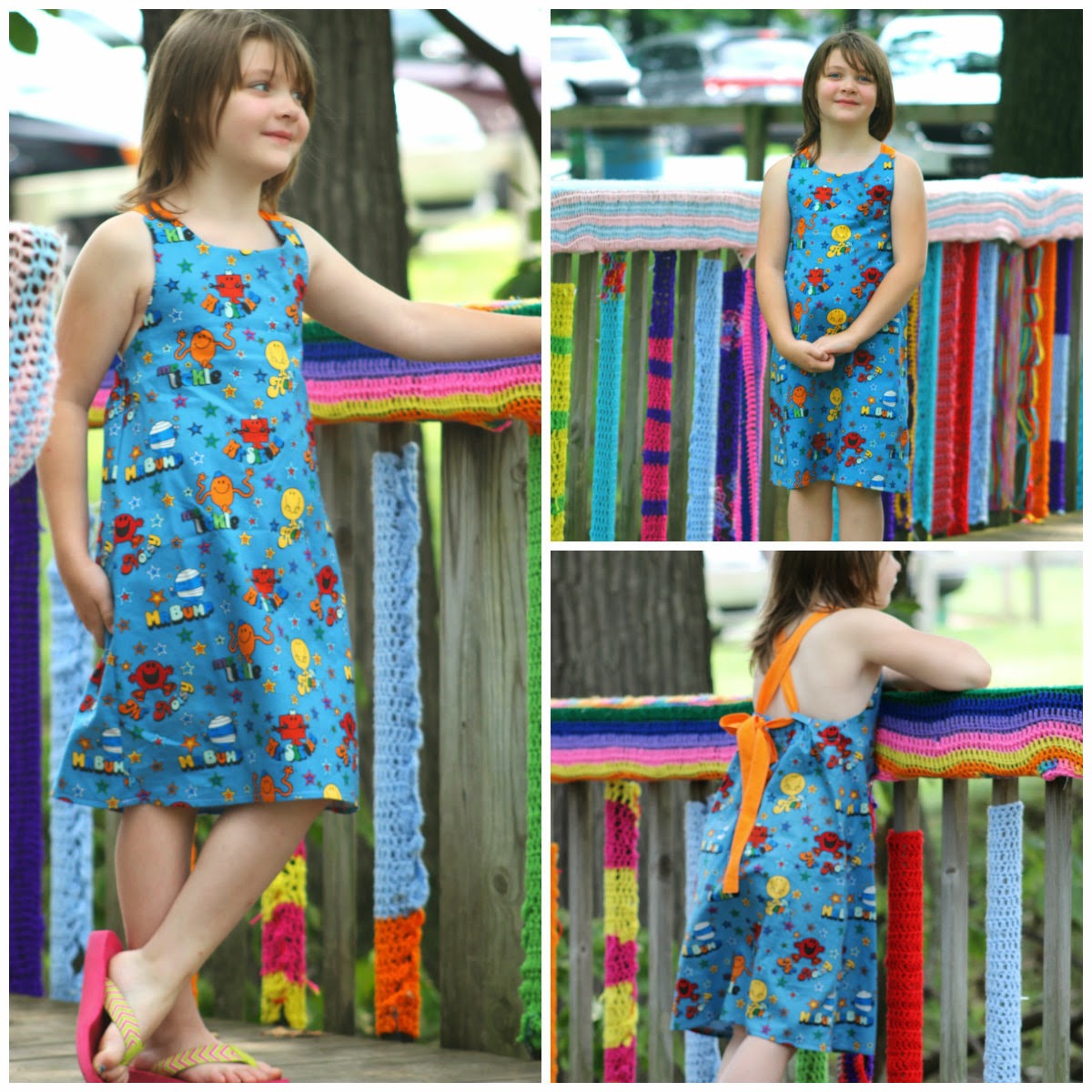 This dress fits her perfectly; both in size and style. I used some Mr Men fabric from my stash.
I had justenough fabric for this top and sadly have no more.

My Niece loved this so much I knew I had to sew her up another one. In true me fashion I used another irreplaceable fabric. I got this fabric in an estate sale recently and I just love it so much. I decided that I should stop hoarding these types of fabrics and just make something that can be loved or worn. 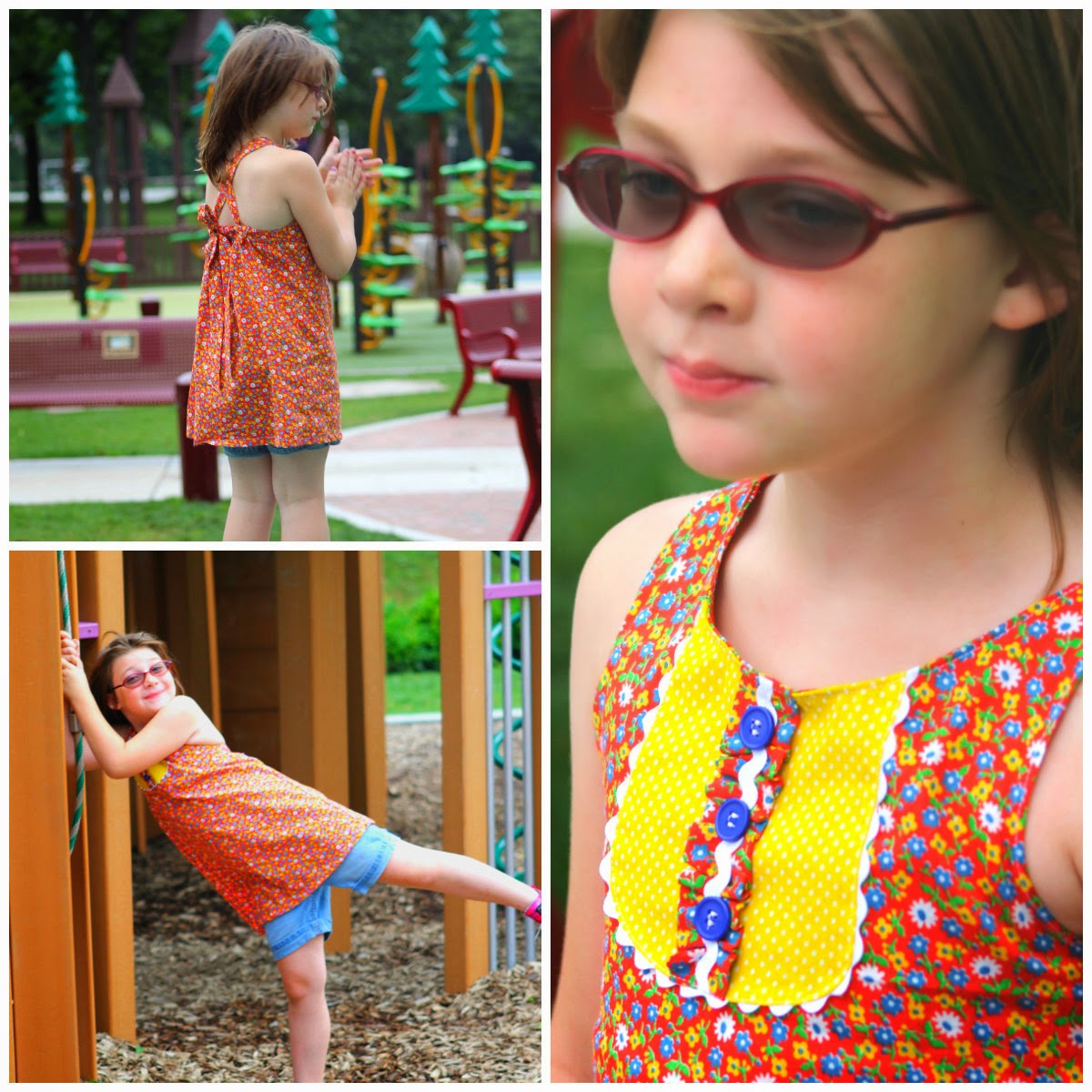 On this version I opted to lengthen the top to a tunic length (I went down to the length of a size 5 dress to make a size 8 tunic). I also used some estate sale fabric for the yellow mini polka dot bib and scraps to make a turned tube a ruffle down the center of the bib. Then accented  that with some white rick-rack
I had laying around and a few buttons.
I really hope to see this on her in the fall with some skinny's, boots and a long sleeved shirt under it!


On adorb overload yet??
If you want to get your own copy of the Sunny Dress/top pattern you should go to the
SewVery Pattern shop . And I mean like, right now because until
tomorrow (August 17th) the pattern is 20% off!!

If you would like to try your luck Veronica is graciously giving away 2 copies of the pattern
(also ending tomorrow) I've included the rafflecopter for you.

There are many talented sewists participating in the blog tour and you should totally
check out all the awesomeness they have cooked up. 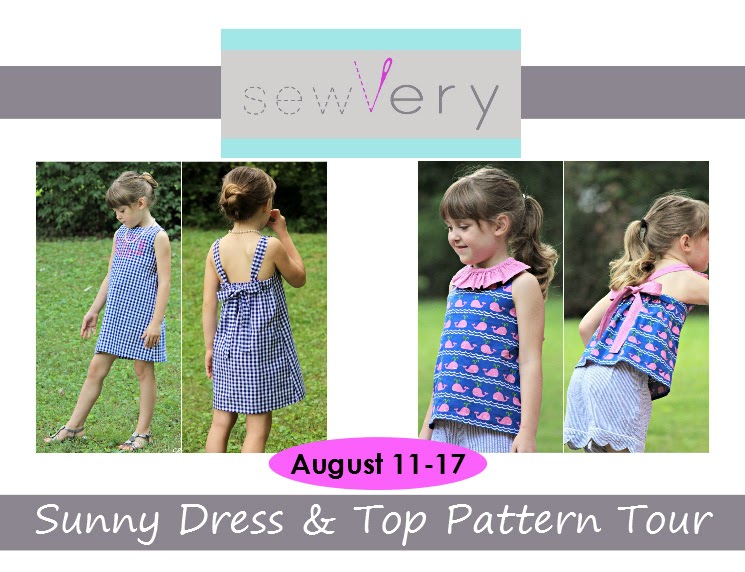 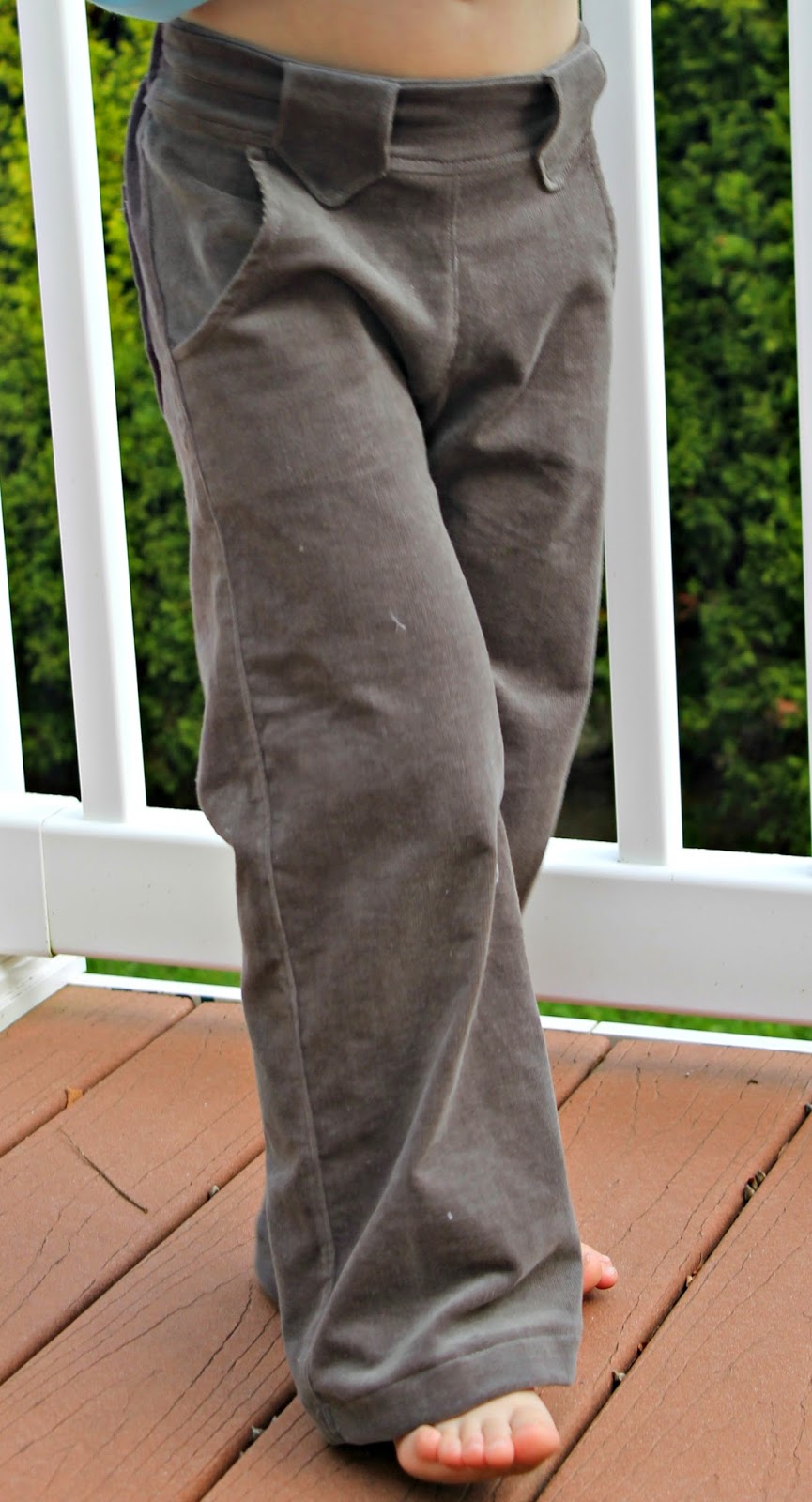 Let me just start out saying how FABULOUS this pattern is.

It is a straight forward classic pant pattern that sews up in a jif. Cute pockets and the tab detail at the waistband I think it is just adorable! 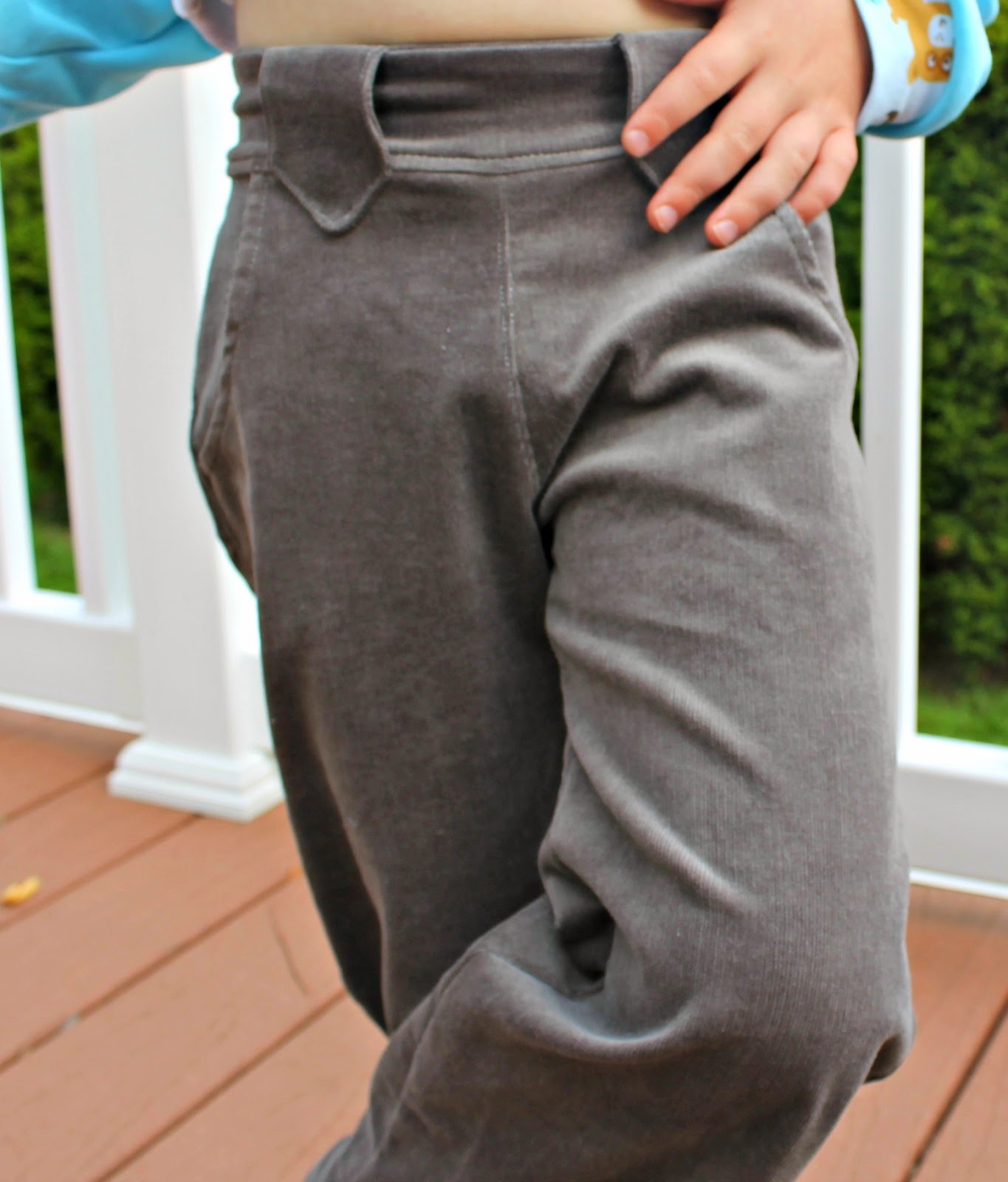 Pattern Description: The Pants have a relaxed fit, two front pockets and two back pockets and optional button tab belt loops. They feature a flat front and elastic fit back to easily customize the fit for your little guy. The pattern also includes the option for adding a 5th pocket, faux fly or back yoke option, for lots of customization. (taken straight from Shwin Designs pattern description)
Pattern Sizing:12m-10 years
Were the instructions easy to follow?Very easy. There was nothing that was tricky I thought. I think anyone could tackle this pant pattern. What did you particularly like or dislike about the pattern?I like that it gives you the instructions for a faux fly option but you don't have to use it, I opted to leave his flat front.Fabric Used:Dove Grey 21 wale corduroy. Isn't there just something about sewing corduroy that screams "Back-To-School" and Fall?Pattern alterations or any design changes you made:I did not alter these at all, usually I add length for my tall boy but on these I just single folded the hem and it was perfect. Would you sew it again? Would you recommend it to others?I actually already did sew these again. I made my nephew and son the exact same pair at the same time. It is great when the kids fit in the same size so I can just whiz through two
pairs at once!
I think that if I sewed them again I would add a little length to the elastic back. Even though my boy is skinny but I feel like it was too snug/bunchy on him.

If you think you need this pattern in your life you can buy them HERE at Shwin Designs.


**Let the record show; this was not a sponsored post**
HAHA

I purchased the pattern on my own and actually had meant to sew them the season before last? of Kids Clothes Week, see my blogpost here. Funny thing, now that I look at my plans, I still need to make the kid some pj pants too!!
Posted by Susan @ MadebyMommainPA.Blogspot.Com at Wednesday, August 13, 2014 No comments:

I finally put my mind to finishing my blocks for the Layer Cake Sampler QAL this past week.
They have been staring at me from the corner of the sewing room. I had left off back in
((SHHH! ((march))!!)

The worst part was that I had left off at the half way point (here) Week 6 and I already had the majority of my half square triangles already cut and ready to piece.

This morning I decided to retake all the original blocks pictures I had done as well as the remaining blocks.
I think it was worth getting up before 7 am on a Saturday to get them taken before my
4 year old woke and would like to "help." 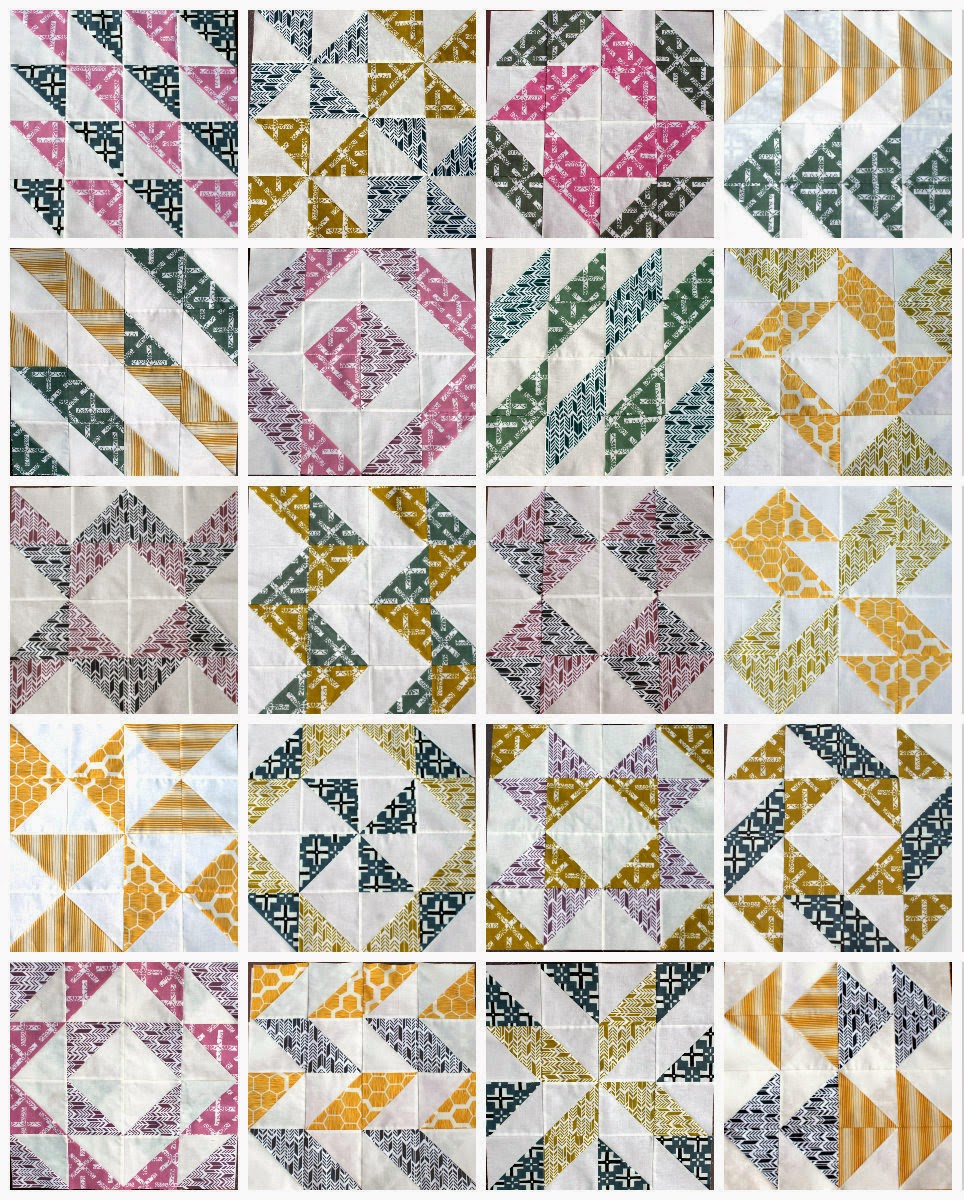 I think part of the road block for me is that I fell out of love with my fabric choices.
Sad, but true. I love them on their own though!

I tried to use colors that I wouldn't normally pick or put together
and sometimes it just doesn't vibe for you in the end.

Now I just need to get my sashing strips and quilt it up. This quilt is going to be massive though.
The blocks alone are 16" finished, once the sashing is added in there it's suppose
to end up being something like 80"x 98".

If you want to do your own sampler quilt using HST;
Material Girls is responsible for leading the way on the QAL here.

I know really y'all just want to know who the wishes giveaway winner is.... 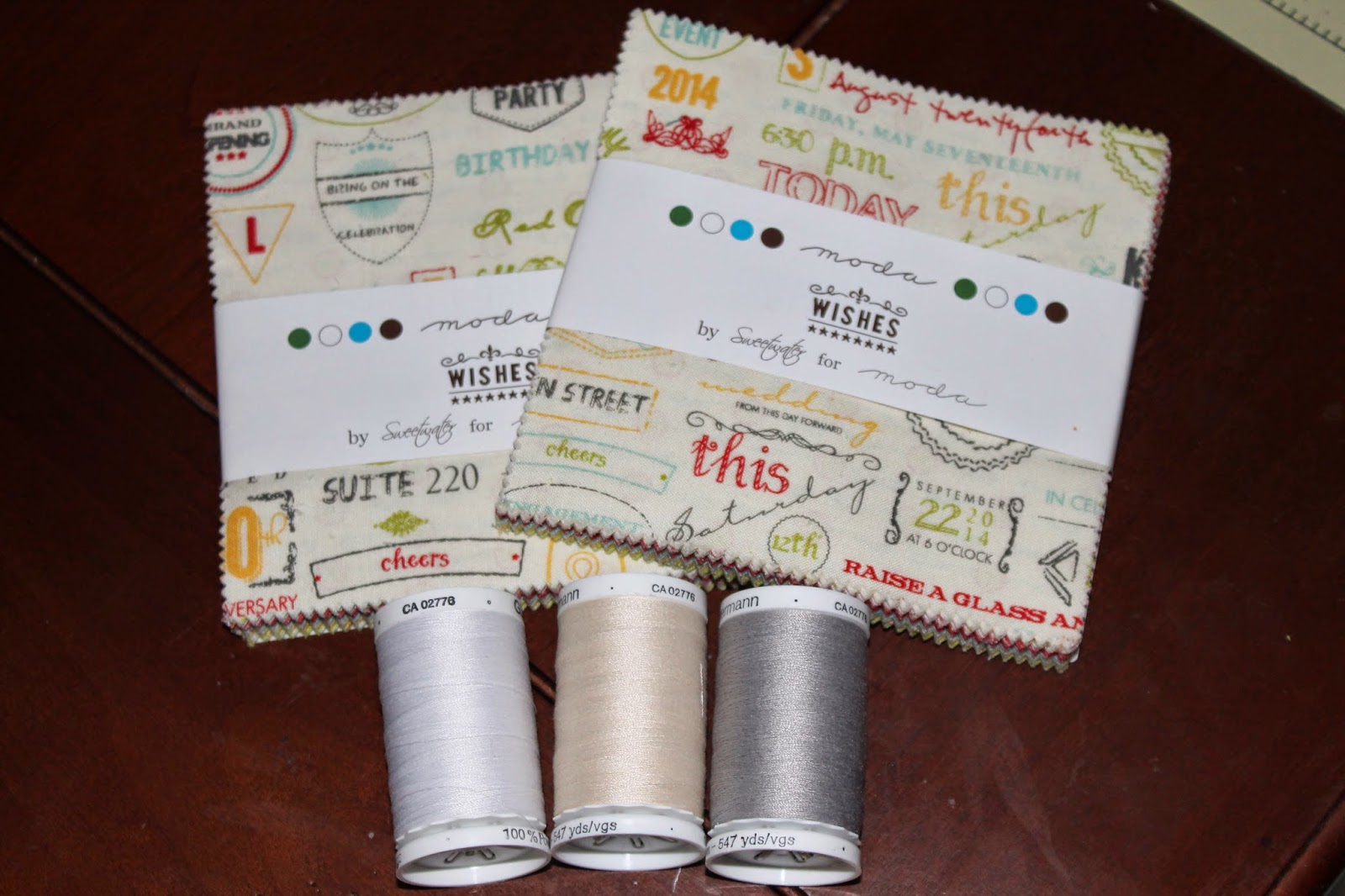