So a few weeks ago I went to this ANNUAL sale to feed my fabric addiction
*cough*
help out a good cause.
I am soooo going again next year but I will be there bright and early with my long johns and coffee! There were SO many people there it was ridiculous. Having never been before I had no idea what to expect. There was such a line I spent more time outside in line than I did inside picking out my lovelies.
Anywhoo these are my finds: 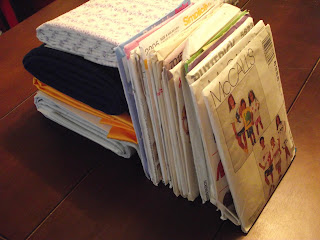 I might have bought a  few patterns. In my defense they were a quarter each! AND I did get some baby ones for my sister in law who is expecting in June. 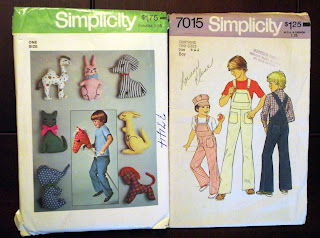 These two I'm keeping for sure though, they are my favorite.
Bonus I spent less than $20 bucks for everything:)
My shopping high did not last long though. On my way home driving through Pittsburgh my car started acting funny. I pulled over and turned it off and waited. . .
Turned the key. Sounds okay? I'll try to make it home...
Okay maybe not. I had no reverse. CRAP!
I called my car insurance for a tow truck and waited on the side of the road for an hour and a half. Good thing I had my patterns to keep me company haha
Well, turns out it was the transmission and THANK GOODNESS my car was still covered under GM's 5 yr/100,000 mile warranty or else I would be toast and I'd be looking to sell a kidney or something. ﻿
Posted by Susan @ MadebyMommainPA.Blogspot.Com at Monday, April 29, 2013 No comments:

So I finally started cutting into my Moda Apple Jacks fabric. I love it so much and loved just looking at it; but I bought specifically for a little boy's quilt, so it had to be done. It is for my nephew Eric who is making his arrival sometime in June. I actually got mine from Fabricworm.com back when it was available everywhere...not so much anymore.

Anyhow, I have been dying to make a bento box quilt so I am using this strip pieced method I found on QuiltsofLove.Blogspot . Her blog is chock full of great tutorials, pointers and tips so I highly recommend you check it out! 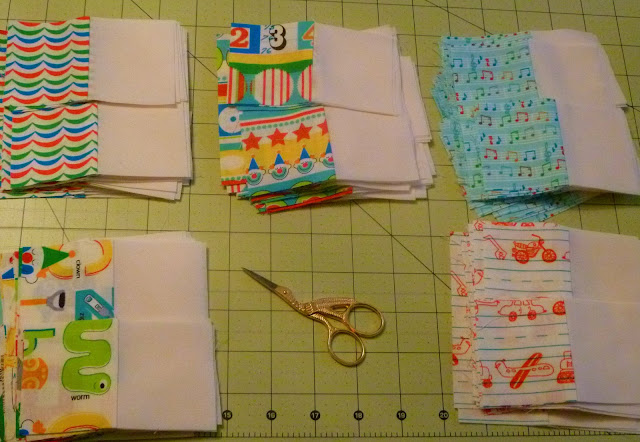 The only fabric you don't see here that I am using is the apple print I picked out with the aqua back ground. I think it will be perfect for the bias tape!

Making PJ's from a Tee Shirt

So sometime last year we took the little man to a Pittsburgh Pirates game and it was a free t shirt game. Knowing that an Adult size Small would still be ginormous on the little guy I tossed it it my sewing room for refashioning at a later date... 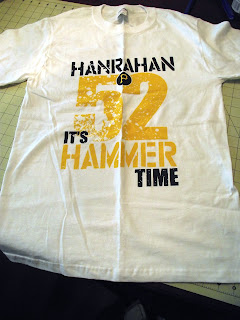 Fast forward---> It is opening day of the 2013 Pirates Season this week, Hanrahan was traded long ago and Hunter could use some summer pj's soon.


Guess it is time to get to work huh? 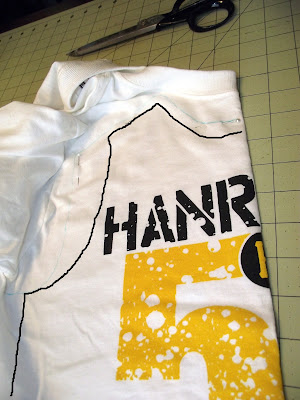 Only cutting the front portion of the tee shirt cut out a tank style. You can free style like me or trace a tshirt that already fits your little one.
I originally drew a larger pattern but ended up cutting it smaller as shown in the black lines.
Then do a neat-o repeat-o and do the back portion cutting the neck a little higher than the front neckline. 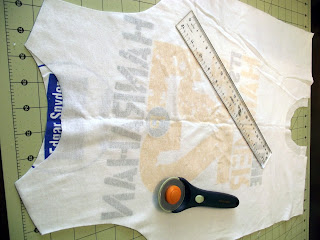 Cut out a "U" shape in the crotch area, no need to make one smaller than the other like I did. I cut that portion out later too haha. Serge or stitch up the side seams and the shoulder with the right sides facing eachother.

Re-using the original t shirt sleeve cut off about 1/2" or so away from it. With the right sides together pin the tshirt hem to the pj sleeve opening. Sew along the closest to the raw edge original stitch line on the sleeve. Turn and topstitch.

Pick out the original neck line from the tshirt. and repeat for the neckline the same as you did for the sleeve. Cut an 1 1/2" strip of the tshirt and do a quickie hem on it. Apply to the crotch area, folding in half and topstitching. I did this in a similar method to applying bias tape if that helps. Seems I get too excited to finish at the end to take pictures. Then I applied regular snaps using my Dritz snap pliers.
I keep meaning to buy some of the Babyville ones to try them out but just haven't gotten around to it yet. I'm sure they would work just as well though.
Last step: Throw them on the little one and watch the hilarity ensue. 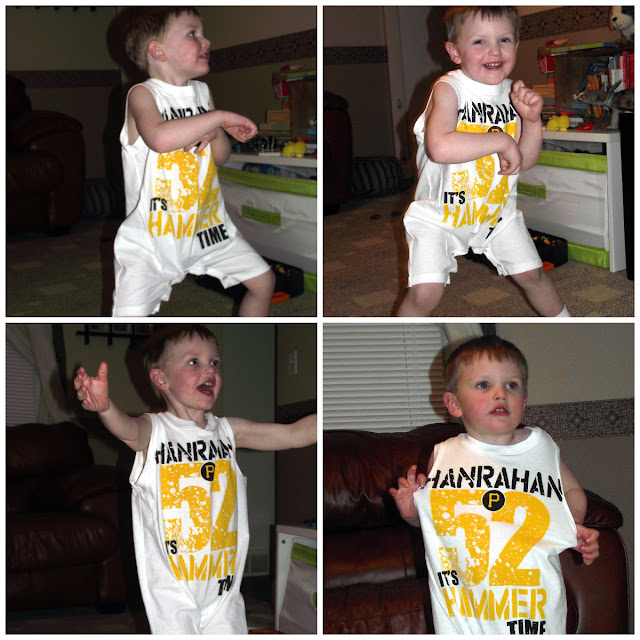 Posted by Susan @ MadebyMommainPA.Blogspot.Com at Thursday, April 04, 2013 No comments:

The weekend before Easter at the last possible second I heard about the Three Rivers Quilters Show .
I made the instant decision that the next morning I was going to pack myself in the car and drive there. Nevermind the fact that I get lost in Pittsburgh pretty easy and that I wrote down very sparse directions on the back of an envelope...I got only a little lost. 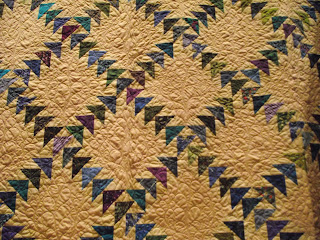 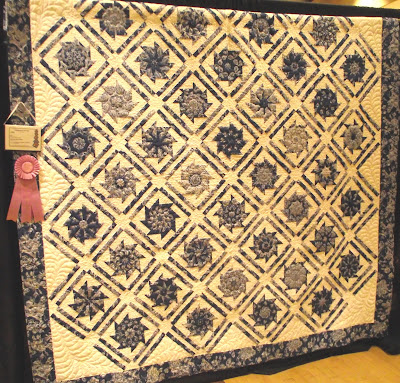 This one almost looked to have extra batting under the block centers.
Very cool. 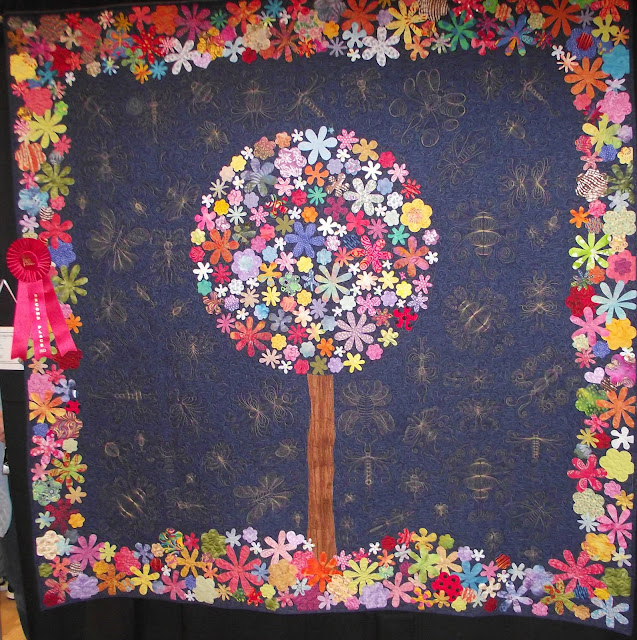 Ew! There's a bug on my quilt--Carol Hartman

I love all the little bugs quilted on there, it was a metallic-y thread too.

There are other quilts that I really liked but I am kicking myself now for not writing down the names or taking a picture of the tag. I apoligize in advance if these are your quilts-PLEASE message me so I can give you credit for your awesome work:) 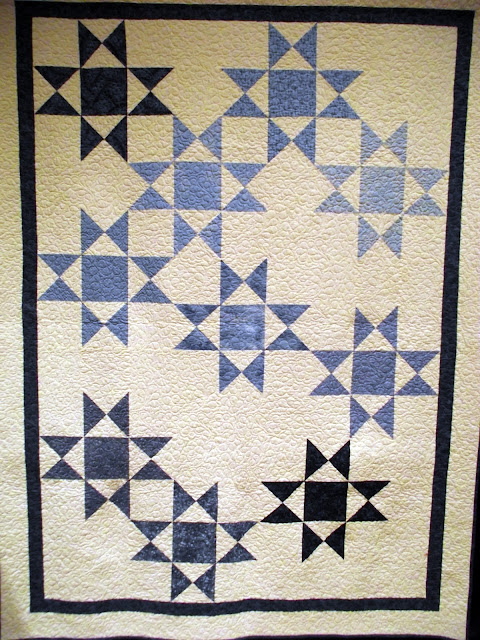 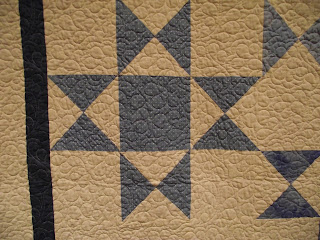 I really liked this one. Blue is my favorite color and I really liked all the white space too.
This one might be Fran Dreams in Black & White & Color All Over by Kathleen Kucerovy. 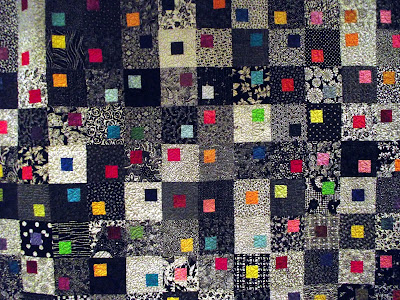 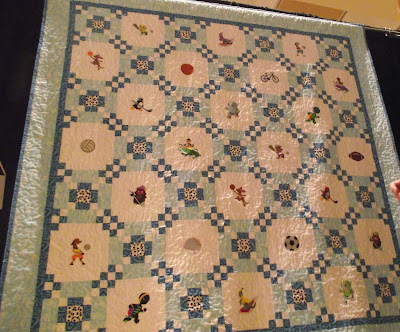 This was my almost 3 yr old, Hunter's favorite. I let him take his own picture (if you can't already tell). It was taken from his stroller.

Although one of my FAVORITE small fabric stores was there it was kind of light on vendors. I really was looking for "more" fabric. Special or popular designer type stuff like Moda/Riley Blake type stuff.

The one vendor I did buy from was LOOM exquisite textiles. They are my favorite when I can get down to the strip district in Pittsburgh. They have website  HERE but really the best way to shop them is to actually GO, it is such a cool little place to see!
Posted by Susan @ MadebyMommainPA.Blogspot.Com at Monday, April 01, 2013 No comments: